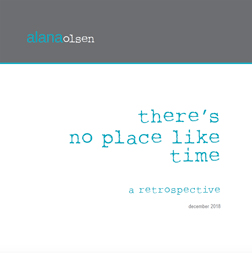 There’s No Place Like Time is a catalogue for an actual traveling multimodal retrospective (so far shown in Germany, France, & around the U.S.) dedicated to the career of a video artist, Alana Olsen, who never existed, & curated by her equally non-existent daughter, Aila.

There’s No Place Like Time is a strange beast: a critifictional catalogue for a real retrospective of experimental films by a videographer who never existed. It forms one room in a novel you can walk through.

Author Lance Olsen and videographer Andi Olsen are staging the faux retrospective in galleries in Europe and the U.S. Enter those spaces and you enter a three-dimensional text: a real place dedicated to the unreal career of Alana Olsen, one of America’s most overlooked artists.

From Alana’s videos and the language surrounding them (including this catalogue), one is invited to infer her character, development, obsessions, and relationship with her equally fictive daughter, Aila, who curates the exhibit.

A collection of allegedly critical and biographical essays, stills, and reminiscences about Alana’s emotionally powerful body of work produced in relative anonymity,

There’s No Place Like Time remembers an oeuvre of fewer than twenty videos (some of which have already gone missing) that span roughly five decades and have, despite the paucity of their numbers, influenced artists as varied as Lars von Trier, Douglas Gordon, and Martin Arnold.

In one sense, then, There’s No Place Like Time is part of a larger conceptual work investigating the problematics of identity construction and historical knowledge. In another, it is an exploration of the question: What does an aesthetics of obscurity look like?

northwestern u.p
amazon.com
See this book, and others, on the Writing page.