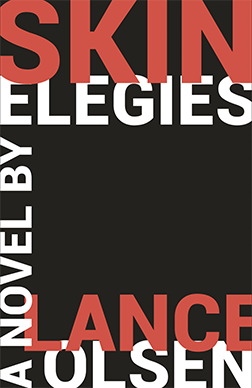 Skin Elegies uses the metaphor of mind-upload technologies to explore questions about the relationship of the cellular brain to the bytes-entity to which it gives rise; memory and our connection to the idea of pastness; refugeeism (geographical, somatic, temporal, aesthetic); and where the human might end and something else begin.

At the center stands an American couple who have fled their increasingly repressive country, now under the authoritarian rule of the Reformation Government, by transferring to a quantum computer housed in North Africa. The novel’s structure mimics a constellation of firing neurons―a sparking collage of many tiny narraticules flickering through the brain of one of the refugees as it is digitized. Those narraticules comprise nine larger stories over the course of the novel: the Fukushima disaster; the day the Internet was turned on; the final hours of the Battle of Berlin; John Lennon’s murder; an assisted suicide in Switzerland; the Columbine massacre; a woman killed by a domestic abuser; a Syrian boy making his way to Berlin; and the Challenger disaster.

An innovative, speculative, literary novel in the key of Margaret Atwood, Stanislaw Lem, and J.G. Ballard.

“I can’t help but adore Olsen’s willingness to rescue text from the screen and set it free on the page.”

“To read Skin Elegies is to ping between verbal asterisms generated by de-selving selves, to become, in the process, de-selved yourself. What is a mind without the brain to house it? Lance Olsen has written an historiographic neuronovel of residues and traces, static and sparks. Skin Elegies is a love poem from the future and a countdown to the past. It’s a new structure for thinking being, now.”

“Skin Elegies is the novel that the twenty-first century has been waiting for. Brilliantly conceived and impossible to sum up because it radiates in so many directions, it poignantly articulates the always-ever-present of the Now, relating experiences as disparate in time and space as John Lennon’s murder, the plastic smell inside an astronaut’s helmet, the consciousness of mountains. With the lyricism of poetry, its clouds of association conjure a theater of memory so profound and interconnected that we feel in our guts how the past, indeed, isn’t really past. Which is another way of saying, the future is already here; it just isn’t finished.”

―Steve Tomasula, author of VAS: An Opera in Flatland

―Stacey Levine, author of The Girl with Brown Fur

“Skin Elegies is an enormously subtle and complex feat of the imagination, blending historical and contemporary artifacts and memories within a much larger and vaguely conspiratorial context fitting for some its late sixties setting. Shades of Pynchon and DeLillo and all Lance Olsen in this important new book.”

―Joseph Salvatore, author of To Assume a Pleasing Shape

“Not since the revolutionary novels of Rudy Wurlitzer in the 1960s and 1970s have I encountered such a stunningly ambitious and astonishing narrative bricolage as Lance Olsen’s Skin Elegies. This meaty metanovel takes an esthetically and judiciously selected handful of our most vital history from 1945 to a prescient 2072, atomizes and digitizes it, then hits the SHUFFLE button before replaying the events through a set of hallucinogenic filters that Instagram would kill for. The effect is like riding a rollercoaster through a set of stargates, looping in an out of a multiverse composed of unforgettable characters and scintillant prose-poems. As fresh as the unfolding new decade, yet as eternal as the oneiric oracles of Tiresias, this book rebuilds our shared past and channels our mutual futures.”

—Paul Di Filippo, author of Ribofunk, Cosmocopia, The Mezcal Crack-up, and others

“In Skin Elegies, Lance Olsen takes the notion of the ghost in the machine to its superlative. Grappling with the human limits of and capacities for violence, grief, tragedy, and tenderness, Skin Elegies asks us to contemplate how the self is constructed and managed in and beyond the twenty-first century. A novel of kaleidoscopic horror―and Olsen at his most haunting.”

―Lindsey Drager, author of The Archive of Alternative Endings

“Reading Skin Elegies feels like watching your mind explode, translating and transfiguring its limitless possibilities into a brilliant galaxy all around and piercingly inside you. Memories spark and intensify, each flare fueled by compassion, invention, despair, horror. We are not ourselves, alone. Lance Olsen’s spectacularly innovative novel is a song of exaltation for the limitlessness of our minds―and a lament for limits of our bodies.”

―Melanie Rae Thon, author of The Voice of the River and The 7th Man

“The curiously soulful mosaic of Skin Elegies‘s stories of connections missed, broken, catastrophic, and impossible is a reminder that, for all that has been and will be made of Lance Olsen’s architectonic innovations, his novels are never other than deeply humane and inspirited, not to mention pure pleasure for the adventurous reader. Skin Elegies is horrific, elegiac, far-seeing, and brilliant.”

“Lance Olsen’s literary experiments are a constant source of wonder. He has the rare ability to reinvent not only himself but the text on the page. His innovative, interrogative prose feels uniquely suited for the crisis of our time. Held together as much by the couple in the supercomputer and the nine other narrators as by the reader herself, Olsen boldly challenges us to recognize that our ability to create meaning in the present might just be what saves us.”

“Visions erupt throughout this magnificent text, a 21st-century metamorphoses, an Ovid come back to restore us to awe. The comparison might make other writers quail, but not Lance Olsen, the American most of the moment and farthest off the chain. Here he often works with figures from history, like the Challenger astronauts and the victims at Columbine, but even those who never made the headlines make bold and bruising new shapes of their stories. Skin Elegies shreds.”

―John Domini, author of The Color Inside a Melon