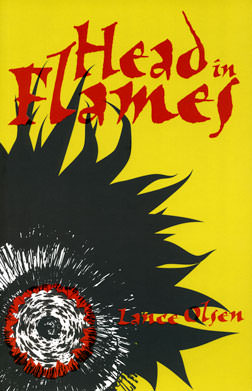 Head in Flames is a collage novel exploring two intersecting narratives about the nature of art: Vincent van Gogh’s suicide in Auvers in 1890 & filmmaker Theo’s murder in Amsterdam in 2004 at the hands of Mohammed Bouyeri.

Head in Flames composed of chips of sensation, observation, memory, & quotation shaped into a series of narraticules told by three alternating voices, each inhabiting a different font & aesthetic/political/existential space.

The first belongs to Vincent van Gogh on the day he shot himself in Auvers-sur-Oise in July 1890. The second to Theo van Gogh (Vincent’s brother’s great grandson) on the day he was assassinated in Amsterdam in November 2004. The third to Mohammed Bouyeri, Theo’s murderer, outraged by the filmmaker’s collaboration with controversial politician Ayaan Hirsi Ali on a 10-minute experimental short critiquing Muslim subjugation & abuse of women.

The aggregate: an exploration of art’s purpose, religion’s increasingly dominant role as engine of politics & passion, the complexities of foreignness & assimilation, & the limits of tolerance.

“Head in Flames has set a new standard for the social consciousness of postmodern narrative.”

“Lance Olsen has written an important book. Important because it manages to succeed where most innovative literature fails: it plays while being deadly serious. The structure is a tour de force of formal innovation calling to mind Pinget’s That Voice, Rulfo’s Pedro Páramo, and Cortázar’s Hopscotch.”

“Recalling the radically condensed novels of David Markson, the fragmented storytelling of Alain Robbe-Grillet, and the high-velocity jump cuts of an action movie—or maybe an MTV music video—Head in Flames is the rare novel that satisfies equally as an exploration of personality, character, novelistic form, and narrative potential.”

“Striking, shocking….In the world of contemporary fiction, Lance Olsen is a rock star.”

“The great power of the book . . . comes from its unflinching confrontation with painful salients in the conflict of civilizations commonly called the clash of Islam and the West.”