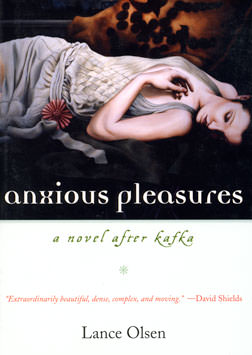 “Olsen “outkafkas Kafka. . . . [Anxious Pleasures] calls for and urges upon us a questioning, a re-reading, a renewed reflecting again and again. Then, gradually, it opens its riches.”

— Walter H. Sokel, Hyperion: On the Future of Aesthetics

“What Olsen is magnificently able to do in this book is take all the timelines (present and past), and points of view, and fashion them in such a way that we get a theater of the absurd that is at once timely, comic, tragic, randomly hysterical, Priapusly (sic) pungent, dreamy and sweet, insightful and intellectually satisfying—all of it in finely modulated prose that shifts effortlessly from one inventive style to the next as each character comes on stage and speaks herself/himself alive….Olsen is a writer’s writer.”

“Anxious Pleasures is a multi-faceted jewel.”

“Lance Olsen’s new novel Anxious Pleasures does for The Metamorphosis what Tom Stoppard’s Rosencrantz and Guildenstern are Dead did for Hamlet: furnishes a familiar story with fresh dimensionality in order to creatively re-explore it .… Anxious Pleasures achieves a thrillingly stereophonic effect .… Daring and literarily subversive.”

“An eminently ambiguous text in the spirit of The Metamorphosis—one that, to paraphrase Olsen describing Kafka, becomes less clear the closer one looks. . . . A challenging, meticulous novel.”

“What a wonderfully and intellectually satisfying novel this is! Jeweled with gorgeous prose, rich in the copper and mahogany tints of the world before the Great War, when what, today, can seem to be little tragedies were preparing us for the overwhelming ones of the past century, Olsen’s fictive meditations on a varied cast’s watching a self devolve exploits with daring and great invention the critical notion that Kafka’s writing is entirely about the history—the ‘natural’ disasters—that would follow him.”

“Following Nietzsche’s Kisses (2006), Olsen treats another great modernist to postmodernist investigation, this time retelling Kafka’s Metamorphosis from the supporting cast’s points-of-view. Olsen hews closely to the original, and his additions, excursions and elaborations are simultaneously stimulating and entertaining. . . . Intricately woven and richly imagined, Olsen’s novel is a cerebral treat unto itself and a fine companion to Kafka’s original.”

“This is the book Lance Olsen was placed on the planet to write. These are the themes—the vertiginous otherness of others (including oneself), the terror of everyday life (how German is it?), reading as creation, the necessary uselessness of art—Olsen has been exploring with increasing power for nearly thirty years. Here, in Anxious Pleasures, he has compressed his leitmotifs into an extraordinarily beautiful, dense, complex, and moving novel.”

“Very clever postmodern gamesmanship. . . . In analyzing, extending, glossing and interpreting [Kafka’s] important novella, Olsen seems to create a metamorphosis of his own.”

“Olsen, who demonstrated his brilliance in probing the heights and depths of human consciousness in Nietzsche’s Kisses, here manages to go even deeper. . . . [He] makes Metamorphosis even more unsettling, absurd, and darkly humorous than ever. Highly recommended.”