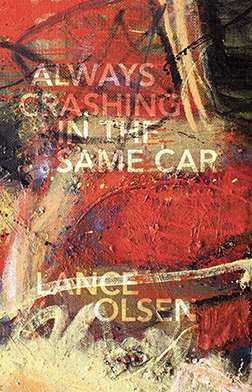 Always Crashing in the Same Car

Having kept his cancer diagnosis a secret from almost everyone, David Bowie’s death in 2016 shocked the world. Lance Olsen’s Always Crashing in the Same Car reimagines Bowie’s last months, during which he worked on Black Star, his acclaimed final album. Washing back and forth across Bowie’s kaleidoscopically costumed life, Olsen’s portrait of the artist as a dying man enacts a poetics of impermanence, of art, of love, of truth, even of death.

At its core beat questions about how we read others, how we are read by them, how (if at all) we can tell the past with something even close to accuracy, what it feels like being the opposite of young and still committed to bracing, volatile innovation.

An intricate collage-novel fusing and confusing fact and imagination, Always Crashing in the Same Car is a prismatic exploration of David Bowie through multiple voices and perspectives—the protean musician himself, an academic trying to compose a critical monograph about him, friends, lovers, musicologists, and others in Bowie’s orbit.

“Always Crashing in the Same Car presents a phantasmagorical mosaic of facts and fantasies concerning the life and art of David Bowie, for whom the mask always melted into the face and vice versa. A meditation on memory, loss, and love; on the projection of a writer’s self through their chosen idols; on the artist’s attempt to orchestrate the manner of a life’s conclusion. All this, Lance Olsen delivers, and more.”

—Jonathan Lethem, author of The Fortress of Solitude

“Already the author of among the most distinguished bodies of work in contemporary American letters, one that includes marvels like Girl Imagined by Chance, Dreamlives of Debris and My Red Heaven, Lance Olsen outdoes himself with Always Crashing in the Same Car. As he takes us on a moving, multi-nodal journey through the stunning kaleidoscope that was David Bowie’s life, Olsen offers up a generous vision of the indispensable role of art, love and friendship as — with old mortality in the offing — we prosecute the wonders of our days and the challenges of our nights.”

—Laird Hunt, author of The Impossibly

“Lance Olsen concocts a world in which the concoction of self is spectacularly illegible and gorgeously weird. Biography, lit crit, metafiction, history: everything and nothing belongs. Time is confetti and here comes the wind. Love and fatherhood, fortune and fame. Augury, memory, dream. Nothing’s sortable. This book blew my mind—it’s all questions, super-charged and divine.”

—Noy Holland, author of I Was Trying to Describe What It Feels Like

“Bewildered and bereft, adrift in the ever-grief of his wife’s death, scholar Alec Nolens seeks comfort by immersing himself in the sea of words surrounding David Bowie, a project he imagines as a ‘love song,’ not so much to Bowie, ‘as to the lacunae around the thought of him.’ Lance Olsen’s visionary novel is the apotheosis of such a project. Always Crashing in the Same Car offers a kaleidoscope of Davids tenderly dissolving into Davy Jones, a desperately-human human being awakened to the expansive possibilities of consciousness by the news of his own impending departure, an un-Bowied genius composing his own rapturous elegy to this transient interlude we call a life.”

—Melanie Rae Thon, author of As If Fire Could Hide Us

“In Always Crashing in the Same Car, David Bowie woos Iman with tales of the Museum of Jurassic Technology, that wonder-cabinet of the lurid imaginary. So, too, Lance Olsen’s novel, which presents Bowie as Citizen Kane, as the Dylan of I’m Not There, as that lyric which won’t parse, that image which becomes iconic but can’t simply communicate. Olsen ellipsizes a greedy-yet-giving Bowie, reader as much as rocker, neither celebrated nor reviled—Davy, determined to never be Mr. Jones.”

“Precise, intensely readable dissections of a life imagined, its trail of clues strewn through evidence that unsettles the idea that any person can ever be known or understood, let alone one whose life was a capacious library of fictions.”

—David Toop, author of Rap Attack and Ocean of Sound, member of The Flying Lizards

film :::
amazon.com
bookshop.org
See this book, and others, on the Writing page.